Angelina Jolie Pitt Is Behind Closed Doors in ‘By the Sea’

Published · / 1,279 Views
“By the Sea” is written, produced and directed by Ms. Jolie Pitt and represents the first time she and Mr. Pitt have appeared on screen together since their 2005 spy thriller “Mr. & Mrs. Smith.”

BEVERLY HILLS, CALIF. — During the filming of “By the Sea,” Angelina Jolie Pitt and Brad Pitt — who play a depressed former dancer and her blocked novelist husband — had a go-to method for lightening an often somber mood on the set. “There were a lot of jokes about how nobody is ever going to want to be our neighbor again,” said Ms. Jolie Pitt, referring to how their characters often spy through a peephole on two lovers in the hotel room next door.

“By the Sea” is written, produced and directed by Ms. Jolie Pitt and represents the first time she and Mr. Pitt have appeared on screen together since their 2005 spy thriller “Mr. & Mrs. Smith.” The potential pitfalls of directing one’s real-life spouse aside, the movie is a risk in other ways. Set in a quiet seaside town in France, it’s inspired by the deliberately paced European art films of the ’60s and ’70s, and — let the speculation begin — tells the story of an American couple’s imploding marriage.

Sitting in a suite at the Four Seasons Hotel here, Ms. Jolie Pitt, 40, whose last film as director was the World War II survival tale “Unbroken,” seemed sanguine about it all — from the fact-or-fiction parsing “By the Sea” might generate to the possible critical reception of what she called “a bold choice.” She added: “I know some people are going to hate it. Some are going to like it. But it was important to me to feel like an artist again.”

On her right wrist she wore a thread bracelet acquired during a recent trip to Cambodia; a runic tattoo peeked from the left sleeve of her beige pleated dress. Candid and engaged, she spoke of the grounding influence of having her six children on location and of how hard Mr. Pitt worked on his French. “As we were shooting he’d sometimes say: ‘It’s strange. You seem to have given me 10 times more dialogue in French than you’ve given yourself,’” she said, laughing hard. “I told him, ‘That’s the bonus of being the writer.’” Here are excerpts from the conversation.

Q. Your first films involved lots of research. How do you prep for a circa 1970s marital drama?

A.It helped that it was set in France, so we focused on the culture and the time in history. But it’s really just me from a blank page. It’s like my study of something that I didn’t even understand about my own pain, my own self. It was a very strange experience — and not one I think I’ll do often. [Laughs] I got married right before: Maybe that was my study.

You had been with Brad for roughly nine years by then. Did tying the knot change anything? 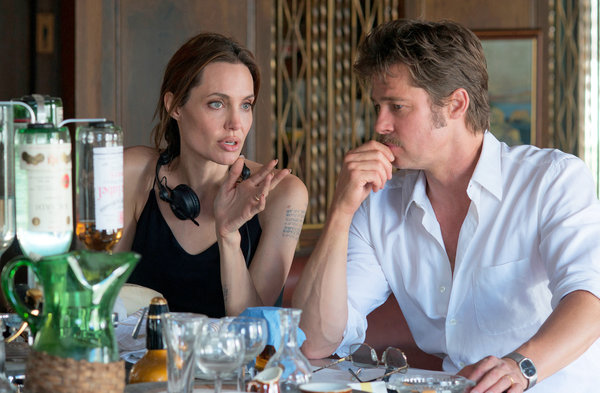 It was just a nice thing. For me, the big moment was when [we] signed the [joint adoption] papers for Maddox and Zahara. That was a decision to parent together, to commit to being a part of each other’s lives for the rest of my life. So [marriage] wasn’t close in comparison. In a way, it was very casual.

The ceremony was in France, but we had to do things legally in California. One day I was in the edit room, and [Brad] was doing something and an assistant said, “You have to sign some papers.” So we came back and between meetings we were told, “Here’s your license.” Then someone said, “The judge is outside.” We both said, “What do you mean, the judge is outside?” Then the judge came in, this lovely guy, and at some point, Brad said, “Shouldn’t we be standing up?” The judge said, “No.” Then suddenly we realized we were married, in the most unceremonial way possible.

Then not much later it was off to Malta to shoot a movie about a relationship in crisis. That’s your idea of a honeymoon? 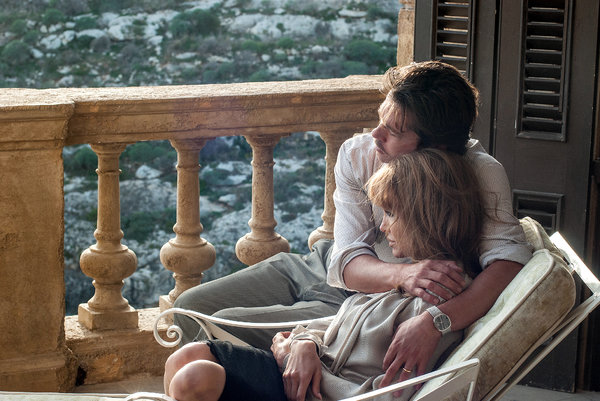 Well, technically it was a honeymoon. A few days into filming I thought: This is such a bad idea. What was I thinking? This is going to destroy us before we’ve even gotten started. But by the time we got to the end of the film, we’d argued, challenged each other, disappointed each other, had good days, bad days, all of it. We’d pushed through, learned something about each other, found a new working relationship and came to like the idea of “Yeah, it gets really bad, but you work it out.”

When you reread the script for your movie — which you’ve said you didn’t initially intend to star in — what was it like to realize that you were going to be the actress put through the emotional wringer?

There were lots of scenes I wanted to change or cut. I realized it was going to be me [naked] in that bathtub. But I told myself, put all of that aside. Like, you can’t change or cut this scene because you’ve had a mastectomy, or because we’re married and people are going to analyze this or that. That would be cheating.

Talk about the challenge of directing and acting at the same time. 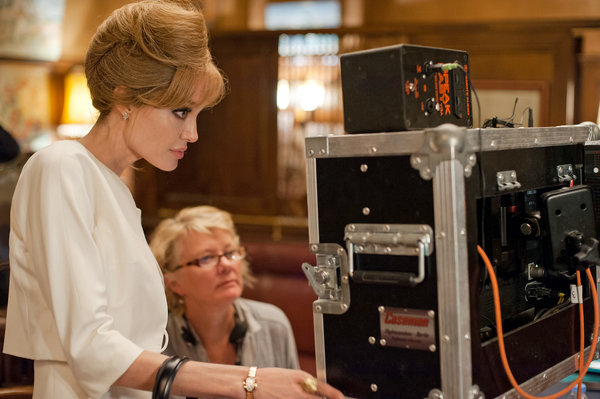 As a director I had to be very sure, very strong in opinion, stable. My character? She shouldn’t direct anything. Not even traffic. She’s a mess. The duality — being a director, then having to become a person that vulnerable — would often be hard. There’s a whole reel of me calling “Cut!” If a doctor saw it, I’d be put on medication. I’m hysterically crying and then calling “Cut!” or during a sex scene I am calling “Cut!” on Brad. You had to laugh at how bizarre it was.

There are so few female directors employed in Hollywood that a federal investigation was recently begun into gender discrimination in the industry. Yet you’ve often seemed to resist discussing what it’s like to be part of such a small group. Why? 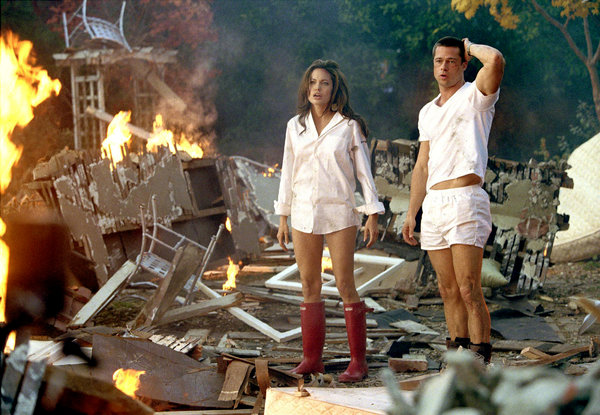 Sexism is part of every industry and must be addressed. But I try not to focus on the negative but the positive side of what we can bring. I want to support other women because of the opportunities I’ve had — and I’ve had a lot of opportunities. What I try as a female director is to do the best job I can and in the meantime bring attention to as many other female directors and writers as I can. Right now I am producing “The Breadwinner,” an animated film about Afghanistan. Nora Twomey is the director.

What do you think Brad’s first experience with a woman director was like?

I’m not just a woman, but a writer-director. We’re also husband and wife. I think it was doubly hard. We know certain things about each other. At first it was a little uncomfortable. You want to be careful what button you press and what you don’t. At the same time, he later said he felt like he could be the most open in his acting, because he trusted I was genuinely there to help him give the best performance.

In the midst of all this you had children to tuck into bed at night, one of them a teenage boy, Maddox, working as a gofer on a not-exactly-PG movie. 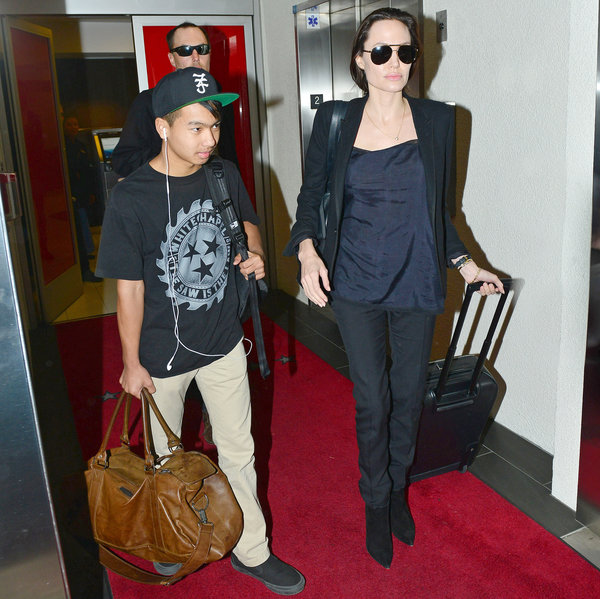 He’d be there for the lighter scenes or funnier ones, but obviously we had a rule that for certain scenes he was on lockdown, not on set. I remember one day I was in my robe, my mascara was running down my face, my hair was still in curlers, and we ran into each other in the hallway. He just shook his head, like, “Wow, Mom. Nice.” This business, I grew up in it myself, so I’d almost be happier if the kids weren’t interested. But he loved it.

Let’s talk about the hacked Sony emails that were released last year. Were you surprised when you read the bruising exchange about you between the former Sony co-chairwoman Amy Pascal and the producer Scott Rudin?

I didn’t read any of them.

Yet you knew what was in them.

Someone told me. There are certain things that bother me and certain things that don’t. Personal attacks on me? I think I’m just so used to it. Honestly, my first instinct was that I was worried about Amy. I had someone call her and ask if she was O.K. Not because I’m a saint, but because I think we have to look at the bigger picture. She’s got kids. I knew it was going to unravel for her.

Returning to moviemaking, do you ever dream of returning to less serious fare, like a romantic comedy?

I love comedies. But I’m never asked to do anything even self-mocking. I tried to do comedy when I was younger. It didn’t work. I don’t think I’m very funny.

In “By the Sea,” there’s plenty of shouting, tears, drinking and, at one point, kicking. Do you mind that audiences will see the film and read into it?

And think, this is what they’re really like? I think you have to accept that. But if people think these are our particular issues, well, that’s wrong. But if they want to think we have terrible fights, are imperfect, have insecurities and can be depressed and emotional, of course that’s true. We have problems, arguments. We are two very human, flawed people. And I think that’s a good thing to show.

A version of this article appears in print on November 8, 2015, on page AR1 of the New York edition with the headline: Behind Closed Doors.